Three or so years ago I have started noticing my index finger go white.  It happened after exposure to a sudden change in temperature.  I didn’t give it much thought at the time until all my fingers and at times the palms of my hand would change color.  This also happened to my feet (it was Summer and I wore sandals quite often).  This is called Reynaud’s phenomenon.  It was eventually linked to a thrombosis I developed a couple of months later (about which I will post later). 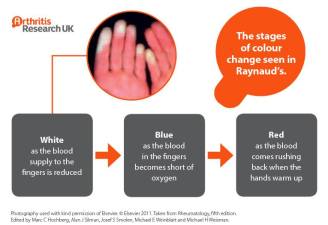 Reynaud’s can be of primary nature having no unknown cause, or secondary to an auto immune disorder.  I now know it was due to my underlying Lupus.

During an attack, my fingers go white at first (this is called pallor) and numb to an extent that at times I cannot distinguish the key from the key chain in the pockets of my pants.  This is when the veins and arteries constrict depleting the tissues of oxygen.  This is the time when I open the nearest faucet and put them under running warm water, or grab a cup of tea, or just stick them below my armpits or crotch.  So, for those who have seen me do this, 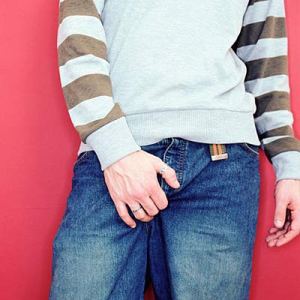 No, I’m not a pervert and you did not turn me on! 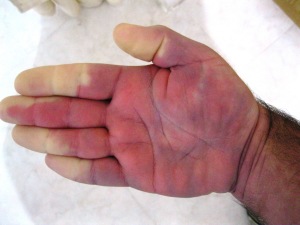 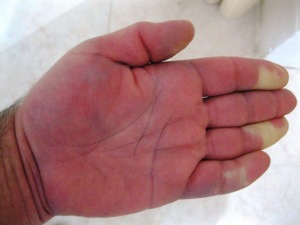 The third stage, which is always seen only depending on the severity of the attack, is called rubor.  This is when the blood flows back and the fingers turn bright red.  It’s Christmas!!!!!NOT.  This means tingling, swelling and a lot of pins and needles and it’s often the time when I have to stop using my hands for some time.

Cold hands, warm heart.  🙂  My feet are most often protected and attacks are quite rare but when at work I have to be in short sleeves most of the time and I get attacks quite often.

Well, you might be asking yourself, isn’t’ there anything we can do about this?

Cold hands, warm heart
We just need some time apart
And everything will be okay
Oh no, not again
Why does it always happen?
It seems like every other day

Life is not as serious as the mind makes it out to be.

A blog on living with a Wolf and surviving it.

My life and living with chronic illness.

If you wear your heart on your sleeve, join the club.

One woman and her positive way to tackle chronic pain